To read the words “Arise and Shine,” I’m reminded of how we were made to shine and to illuminate. I have recently begun to uncover the concept that I truly am a carrier of His light. We sing the songs “This Little Light of Mine” but didn’t have a true revelation of the meaning until recently. It had to be in November 2016 when I was at a meeting where we discussed being in the image of our Creator in our hearts, minds, and souls. I know that Jesus has a place in my heart, but I really didn’t understand how He causes us to become illuminated with His love and care.

To become illuminated would mean that I would shine forth in this world. That I would be so consumed with His love that when you looked at me, you would see only Him. This has been something that I find myself transforming into on a daily basis, and I do mean daily. There are days that, when I wake up, I have to remind myself that I am being transformed and molded into the person I was meant to be.

I remember being at a meeting where I began to see in my mind’s eye, a future version of what myself looked like. I literally saw myself as a woman who was carrying light in my hands, and there was light coming from body. This image of me carrying the light automatically took me to a place in the bible where we read about the 10 Virgins and the oil lamps in Matthew 25-1:13.

At that time the kingdom of heaven will be like ten virgins who took their lamps and went out to meet the bridegroom. 2 Five of them were foolish and five were wise. 3 The foolish ones took their lamps but did not take any oil with them. 4 The wise ones, however, took oil in jars along with their lamps. 5 The bridegroom was a long time in coming, and they all became drowsy and fell asleep. 6 “At midnight the cry rang out: ‘Here’s the bridegroom! Come out to meet him!’ 7 “Then all the virgins woke up and trimmed their lamps. 8 The foolish ones said to the wise, ‘Give us some of your oil; our lamps are going out.’ 9 “‘No,’ they replied, ‘there may not be enough for both us and you. Instead, go to those who sell oil and buy some for yourselves.’ 10 “But while they were on their way to buy the oil, the bridegroom arrived. The virgins who were ready went in with him to the wedding banquet. And the door was shut. 11 “Later the others also came. ‘Lord, Lord,’ they said, ‘open the door for us!’ 12 “But he replied, ‘Truly I tell you, I don’t know you.’ 13 “Therefore keep watch, because you do not know the day or the hour.
When we see that five of the virgins had oil with them, and that these five were considered wise, it helps us to understand that in a practical sense we should ensure we always have oil with us and that we are prepared. But after I had this vision of my future self, and how I saw the light in my hands God showed me that I was a light bearer. The oil should always be used to keep the flame burning, especially if the oil is representative of the Holy Spirit and the flame represents His light that dwells within us. 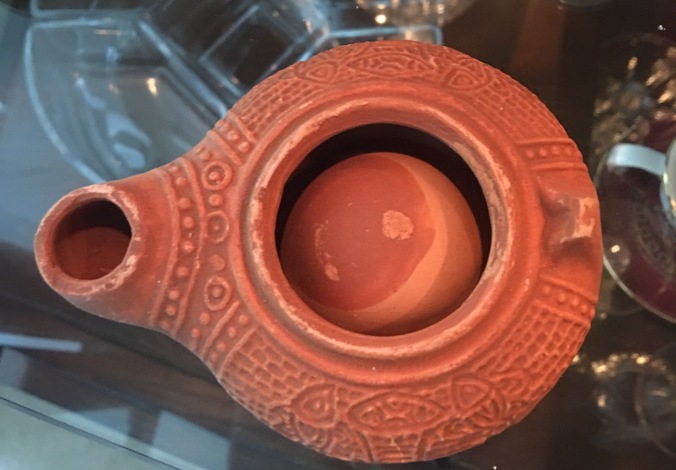 This is a replica of a ancient oil lamp

We are the ones who are responsible for carrying Him and having Him as our light to shine in the darkness. We need the constant oil of the Holy Spirit to fill us up. If we don’t keep filled, we run the risk of not being as a light unto all the earth. This parable makes me believe that this is the way the Father is communicating about Christ being the Bridegroom. It also makes me believe that the five virgins with the lamps but no oil were the ones that were preoccupied with their own issues as opposed being focused on the Father’s business.

I believe that our Creator is wanting us to live the life we were supposed to live before the fall of man happened. We are the ones that are supposed to bear His image. We carry His breath in our lungs and can live a life full of abundance and hope.

When I heard the word arise, it reminded me of waking up from slumber to awaken and to take off the “grave clothes” so to speak. To arise; to be fully me all the time. That would mean for me to be free to be authentic in all areas and situations.

The enemy has made it a mission that we remain asleep, unaware of who we are and what our purpose is. Teresa of Avila, a 16th century nun stated, “The chief of man is to glorify God and enjoy Him forever.” The enemy of our soul desires to keep us from being able to see God for who He is. If we can find a reason to not lean into Him, to not enjoy Him, then our flesh will build up our walls of self-protection and we will end up keeping Him out. What I have found is that God is never distant from me, but it will be me that is distant from Him and I in turn will cause separation to happen.

In the Garden of Eden, Satan’s goal was to bring doubt and to sow shame and guilt with the end goal being separation between God and man. This was never supposed to be the plan and these things were never supposed to be part of our identity. The enemy knew this and has worked to try and entangle us in a web of lies. God made Adam and Eve with the intention that they would live forever with Him. Death was never supposed to be in the plan. The enemy perverted what God had stated to man and from that moment on, mankind was ensnared. It took the coming of the “second Adam”, Jesus, to live as a sacrifice to redeem man’s life.


ITS TIME TO RISE

God is waking up humanity so that we can walk into our destiny here on earth. When we open our eyes, and allow our hearts to come alive to His love and care, we can then begin to move in Him and walk in our true identity. It’s about uncovering, or even a type of unveiling, that allows us to be able to look into a mirror with full confidence that we are children of God and that we are filled with light and grace.

When we find ourselves struggling with things that are familiar to us such as shame, guilt, rejection, and other self-destructive ideas or behaviors, it will serve as an indicator that we are out of alignment and that this is a part of our heart that needs healing. We will have contention growing in our hearts and minds as long as we continue to embrace those lies as part of our identity (this is the fruit from the tree of knowledge of good and evil). This will only breed death and there is no life in it. We do have the opportunity to eat from the tree of life, in which we can still embrace hope and a future for not only ourselves but for those around us who are directly impacted by our lives.

In my second year of ministry school, I came face to face with a part of my heart that was growing and fostering a lie. It shook me and caused me to really examine myself in order to pull out this weed or “tare” so to speak that was growing alongside all of the positive things I was embracing about my identity. When I think of this picture, I think of the story in the bible where Jesus tells the parable of the wheat and the tares (Matthew 13:24-30) and how the both of them will grow up together. There will be a time, though, when you can tell them apart and when that happens, you can uproot the tare and throw it into the fire. I remember one day in class, our speaker talked about when the wheat was mature it would bow down, but the tare would remain straight. Imagine that, when the fruit of your life becomes mature, it will cause you to bow, to become humble as opposed to the “junk” or weeds which will erect itself and make itself known. That is how rejection or any other any other fruit of the flesh will respond. Rejection will not yield to God or His way and will make itself resistant to the love of God. An interesting thing about this parable is that the tares have to be thrown into the fire. This would mean that we have to cast the tares (shame, guilt, rejection, etc.) away, not God and not us.

We were made to shine, loved ones. We were meant to live a life of fulfillment not a life hindered by what we perceive as our short comings. It truly is our time to Rise and Shine.

This site uses Akismet to reduce spam. Learn how your comment data is processed.